Callum, who was representing Doncaster Rovers, managed to go the full nine-game season unbeaten, and will now play second place Ethan, representing Barnsley, in the final on Monday evening.

Representatives from Leeds, Barnsley, Sheffield Wednesday, Huddersfield and Doncaster Rovers were selected on the basis that they are participants of the Premier League Kicks programme, the flagship community programme which uses the power of football and sport to inspire young people.

Mark Cooper, Sport development officer at Club Doncaster Foundation, said: “The tournament was a huge success, allowing our Kicks participants to engage with young people from other areas, and making for a friendly bit of fun during these challenging times.

“Good luck to both finalists on Monday night, they’ve both played really well throughout the tournament and hopefully it will be an exciting game.

“Also I’d like to say a big well done to everyone who took part.”

You can find out more about Doncaster kicks, here. https://clubdoncasterfoundation.co.uk/school-participation/kicks 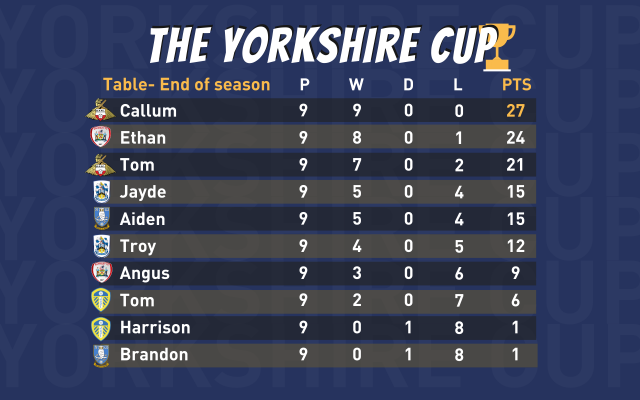