Volunteers are leading the way for on-going Fit Rovers success

Fit Rovers, Club Doncaster Foundation’s central health and wellbeing project, has received a massive boost in delivery because of its volunteers.

The work done by volunteers at Fit Rovers has contributed to improving the overall satisfaction of the course, whilst also offering a variety of different experiences and sessions for the participants to enjoy on a weekly basis.

Neil Barron, a Fit Rovers graduate himself, has recently offered up his spare time to lead the delivery of boxing sessions on a Tuesday night. This gives those who really want to push their fitness to the next level the chance to do so, with plenty of Fit Rovers Veterans taking part.

When asked why he decided to help out at the sessions, Neil highlighted the fact that he wanted to continue to help others in their journeys. He said: “It’s really good to be able to put something back into the project.

“Since joining Fit Rovers at course two, I’ve really enjoyed the camaraderie and the physical side of it, so I always wanted to give something back to the course.

“I look forward to every session with this great bunch of lads.”

Another reason why Neil leads these sessions is so he can see the improvements made by the participants, which have really come to shock the former Doncaster RLFC player.

“I’ve seen massive improvements. A lot of the participants you will notice big changes physically, but at the same time they’ve become a lot more outgoing and confident within themselves,” Neil told Club Doncaster Foundation.

“When they come to the boxing sessions it can be very intimidating walking into a boxing gym for the first time, but the group is very supportive and everyone really enjoys it.”

As a man who runs his own business and continues to be involved in the backroom staff at the Dons, it would be easy for Neil to take a backseat at sessions.

However, the former Moorends Thorne Marauders head coach isn’t one to do such a thing. He said: “I’ve been involved in sport all of my life.

“I’ve played semi-professional rugby player for the Dons and I still work for the club, so helping out with sport and fitness is something I enjoy doing.

“It is very rewarding to be able to put something back into a project like Fit Rovers, which continues to help others.” 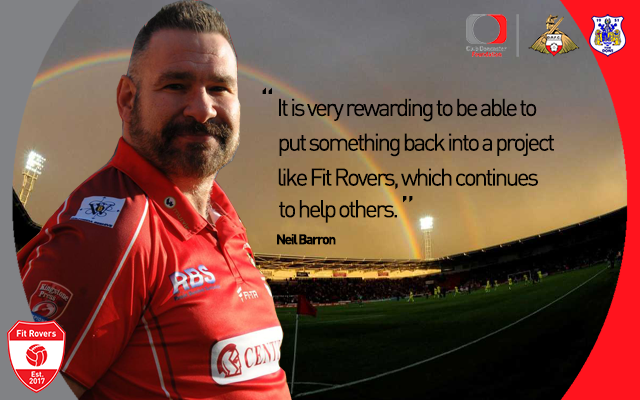