Students and Staff at Club Doncaster Sports College have smashed their target of travelling 757km from the Keepmoat Stadium to the Stadion Galgenwaard, home of FC Utrecht, in just over one week.

Learners were invited to run, walk or cycle to contribute the virtual kilometers, and have done just that in all weather conditions ranging from 27 degree heat to driving rain and hail storms.

The annual European Tour for the College was postponed in light of the Coronavirus pandemic, but has since been transformed into a virtual equivalent.

Typically the students would travel through Europe to Utrecht where they would enjoy a weekend of football, but it was agreed that the College would attempt to make the trip by traveling the distance from home, with a competitive FIFA match to conclude the tour.

Ben Thompson, Deputy Principal at Club Doncaster Sports College, said: “We are very proud of the learner response to the U-Trek Virtual Tour, there was obvious disappointment that we had to cancel the tour due to Covid-19 but this has turned a negative into a huge positive.

“Setting the 757km goal has given learners something to aim for, alongside their studies and has encouraged learners to get on their bikes or put on their running shoes in a time which has been notoriously difficult to get motivated.

“The European Tour is one of our flagship events, so it only seemed right to honour it by making the trip, albeit virtually, and playing a game against our neighbours in Utrecht.”

Not only have the students achieved the target in such a short amount of time, they've also continued to donate their distances, even after reaching the 575km goal.

The college are now working with FC Utrecht Youth Team Coach, Robin Van Alfen to arrange the FIFA match which will be streamed live via Twitch.

The 2020 tour was set to be the college’s 5th annual European tour, with a total of 28 students.

Their sports courses provide a direct pathway to university or a career in the sports industry. 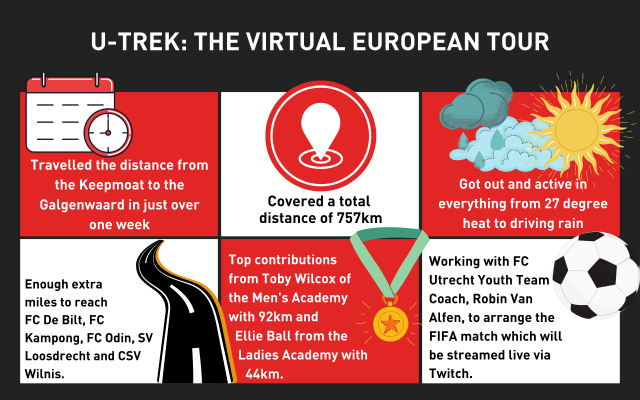