Club Doncaster Sports College Students celebrated the magic of the FA Cup as they successfully travelled from the Keepmoat Stadium to the London Stadium by foot in just seven days.

The virtual FA Cup Run challenge was launched as the Rovers squad prepared for their visit to the London Stadium to face West Ham United in the fourth round of the competition last Saturday.

Students and staff helped complete the challenge by running and walking the equivalent distance of 163 miles from the Keepmoat Stadium, all the way to the London Stadium.

Participants submitted the distances that they covered which were then tallied up into the Sports College grand total.

"There was a lot of enthusiasm in our virtual lessons on the Monday after the Blackburn victory, the students were very keen to see if Rovers could draw a big name and so it transpired when we were drawn away to West Ham United”, explained College deputy principal Ben Thompson.

“It was bittersweet for many as the tie presented an opportunity to visit the magnificent London Stadium and face West Ham, who are doing very well in the Premier League.

“As staff, we decided that we'd launch the FA Cup Run, an opportunity to encourage learners to get their steps in, whilst achieving the goal of traveling 163 miles to East London. The learners really took to the challenge and the irony was that for at least 2 days of the challenge we had heavy snow, making the feat to reach London by the Friday, all the more commendable".

Their sports courses provide a direct pathway to university or a career in the sports industry. 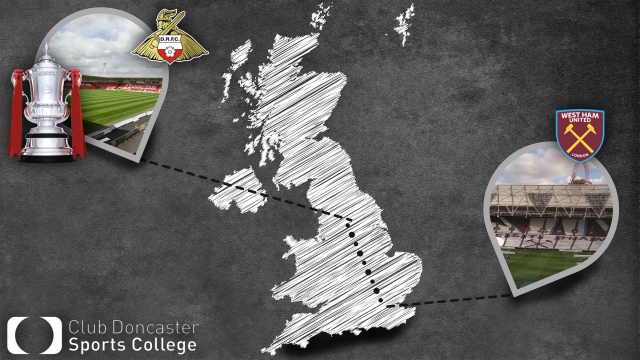