Rivalry Reignited: Fit Rovers play on the pitch returns for the first time since 2019

The annual Fit Rovers play on the pitch event was finally back this year, after a 3 year gap due to the pandemic.

Team Jan and Team Tim took to the pitch on Saturday 7th May, both looking to take home the trophy!

Participants from Fit Rovers courses 10 to 15, were split between both teams, with preparations taking place in the build up to the big game, with regular training sessions and friendly fixtures held at Cantley Park.

Assistant managers for both teams (Team Tim – Josh Bucknall & Phoebe Sneddon, Team Jan – Mark Cooper and Maia Smith), battled it out with a game of table football, to determine who would secure the home changing room and home kit. Assistant managers for Team Tim came out on top with a comfortable 5-1 win.

Participants were handed a surprise, the day before the fixture, with a late signing for both teams. Former Doncaster Rovers player, Andy Butler, laced up his boots to feature as a 20-minute power play for both teams, in one half each. With a coin toss taking place before the game with each manager, Team Jan won and chose the Butler power play in the second half.

Each team got the chance to have a professional headshot on the pitch, ahead of the game, before completing their pre-match warmups and re-emerging to the pitch a short while later, alongside their family members.

Team Tim made the most of their power play in the first half, with 2 goals coming from Butler in the 2nd and 9th minute of the game, taking a 2-0 lead into the break.

Team Jan created a guard of honour for the winning team, as they lifted the trophy in-front of friends and family in the crowd.

Health and Wellbeing Officer, Josh Bucknall said, “The Play on the Pitch is a brilliant event that we look forward to hosting every year. It’s fantastic to finally be able to do it once again.”

“I’ve been lucky enough to take training, be involved with the friendlies and the event as a whole.”

“It’s another event for us to celebrate the incredible fitness journey the participants have been on and they should be really proud of what they have achieved.” 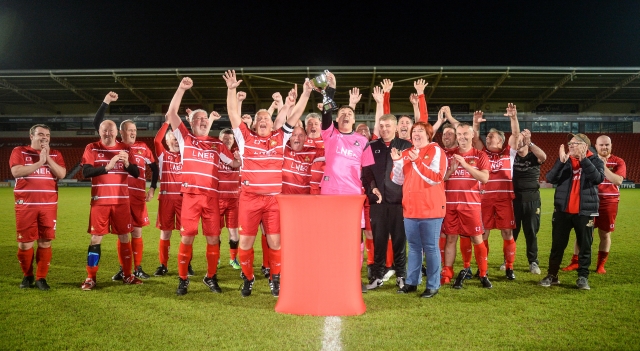