Revenge or Repeat ends in a thrilling draw

Team Ryan did all they could to erase the disappointment of last season’s Fit Rovers play on the pitch defeat, but unfortunately came up short in their quest for victory, drawing 2-2 with Team Budtz on Sunday.

More than 300 spectators were in attendance at the Keepmoat Stadium for the match, dubbed ‘Revenge or Repeat’, and they were treated to an intense match with a frantic finish.

Welcomed out onto the pitch to a roar fitting of a Champions League final, Fit Rovers veteran and player Dave Sturdy kicked off proceedings with his rendition of ‘Abide With Me’ on the trumpet.

It was Team Ryan who enjoyed the better of the opening exchanges, with Dave Wells-Burr and Scott Mantovani testing goalkeeper Chris Hartshorn early on. Team Budtz regrouped after a shaky start and began to work the ball around nicely in the final third, but ultimately it was Team Ryan who opened the scoring in the second half through a constant threat. 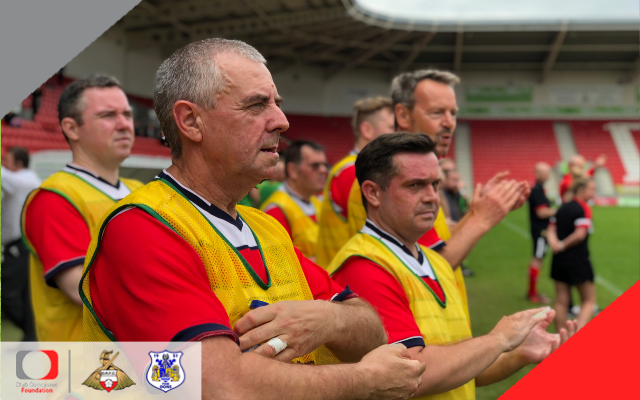 Wells-Burr gave Team Ryan the lead early in the second half, slotting the ball past Hartshorn after being played through on goal by Steve Vickers.

Team Ryan’s lead lasted only 40 seconds, with Gareth Dawson’s low strike catching out John Paul Watters in goal. The tide was starting to turn in favour of Team Budtz, with their wildcard Josh Gelder beginning to control proceedings.

After an extended period of pressure, Matt Harriman saw his header parried by Nigel Beardsley, who replaced the injured Watters in goal, before Gelder quickly pounced on the loose ball to give Team Budtz a 2-1 lead with ten minutes to play.

Boasting their own wildcard, Team Ryan turned to Benjamin Waters to inspire the team, and the 21-year-old did just that with five minutes left of the game.

Quickest to react to a clearing header from Jon Robinson, Waters shifted the ball onto his weaker right foot, before unleashing a curling effort on goal. Gareth Dawson attempted to head the ball off the line, but his effort was in vein.

A few more chances were created in the closing stages by the two sides, but both defences held firm as the game finished 2-2. 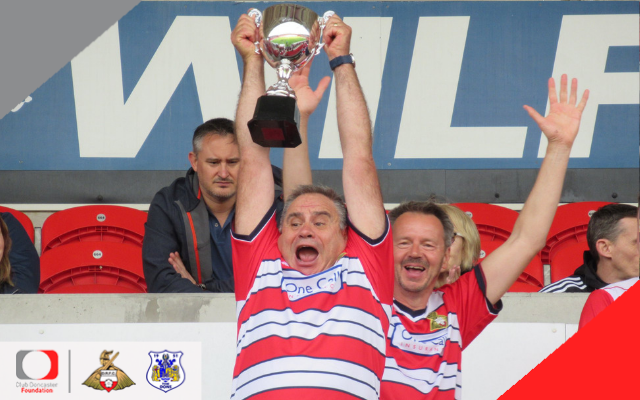 Team captains Graham Sutherland and Tony Winstanley lifted the Fit Rovers trophy amongst the fans, proudly presented by the family of the late Nidge Roe, who played in 2018.

The final whistle sparked jubilant celebrations among players, who celebrated their achievement with their family and friends at the Keepmoat Stadium.

From heartbreak to glory for Sutherland and Winstanley

One of the enduring images of the 2018 spectacle was a limping Graham Sutherland, who injured his leg in the week before play on the pitch. The Tottenham Hotspur fan, who joined Fit Rovers in 2018, attended last years’ game on crutches and a pot on his injured leg. 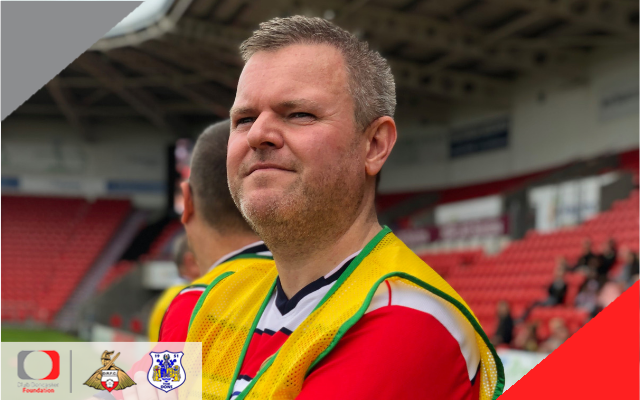 It was a huge moment for Sutherland, who thought his play on the pitch dream was well and truly over. As part of his ongoing commitment to the project, the Fit Rovers team decided to make Sutherland the captain for Team Budtz in 2019.

Involved from the start, Sutherland almost had his name in the headlines, but his audacious outside-of-the-foot effort clipped the wrong side of the post and went out for a goal kick.

How fitting it was that the player who could have easily given up on his chance to play on the pitch should make such a significant contribution and lift the Fit Rovers trophy at the end of the game.

Another fantastic moment from the event was the presence of Tony Winstanley, who has battled against the odds to play on the pitch in 2019. 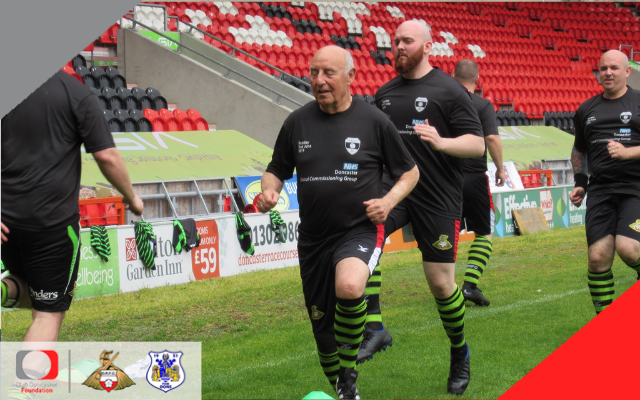 Suffering a stroke a month before the match last year, 69-year-old Winstanley had to withdraw, instead taking up a position within Tim Ryan’s coaching staff. Determined to come back stronger and make his case for 2019, the Doncaster Rovers fan has continued on his Fit Rovers journey.

Given the captaincy for Team Ryan in 2019, Winstanley took to the field in memory of Nidge Roe, dedicating his performance to the former Fit Rover and lifting the trophy high above his head, proud to do so in memory of his friend.

Having seen his side narrowly lose out last year in a 5-4 epic, the former Doncaster Rovers left-back was determined to claim victory on Sunday, but could only draw. His side did well, controlling the opening 20 minutes, taking the lead in the second half, before being asked to respond after going 2-1 down late on. Showing plenty of character, Ryan’s side drew level, and could have easily took the lead as the clock ticked down. 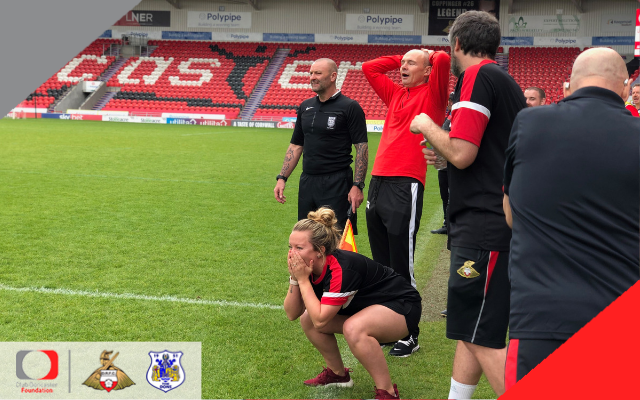 The result means that Ryan, whilst still yet to win this event, can take plenty of positives away from the performance, and potentially build on it again if he extends his Fit Rovers managerial stint into 2020.

With no Andy Butler to call upon this time around to get his side back into the game, Ryan found sparks of brilliance in duo Dave Wells-Burr and Benjamin Waters, the latter levelling the game with 85 minutes on the clock. Wells-Burr injected pace and flair into Team Ryan’s attack, whilst Waters nullified the threat of opposing player Josh Gelder.

Speaking to touchline reporter Mark Ellames in the aftermath of the draw, Ryan spoke about the closeness of the contest and not letting Team Budtz enjoy long periods of the game in possession. He said: “I felt a 2-2 draw was a fair result, a credit to all the players that took part, it was a sensational game.

“We took a deserved lead and the lads were playing well. It was frustrating to concede the two goals, but we showed character to draw level.”

Ryan mentioned the importance of the two wildcards Gelder and Waters, whom he felt dictated the second half.

He added: ”The younger lads (Gelder and Waters) both scored good goals and having them on the field really helped the Fit Rovers participants get the most out of the experience.”

Budtz’s gamble fails to pay off

In the end the temptation to grab a game-killing goal was simply too much to resist - and it was easy to understand why.

Team Budtz manager Jan Budtz knew a third goal, with the scores at 2-1 in favour of his team, would secure his team back-to-back Fit Rovers play on the pitch titles. Unfortunately, this temptation came back to haunt the Dane, who saw his side concede a late goal. 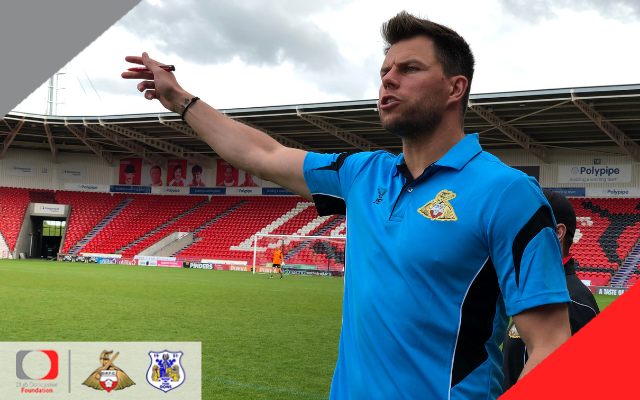 A slow start from his side, who were dominated in the opening quarter but did not concede, was followed by a period of sustained pressure in the opposition’s third. Budtz’s side responded to going a goal down early in the second half, before holding out for a draw as they pushed for a winner.

Goals from Gareth Dawson and Josh Gelder gave Team Budtz the lead with ten minutes to play, but his quest for another victory over rival Tim Ryan came to an abrupt end when Benjamin Waters found the back of the net late on.

Putting his own personal battle with Tim Ryan to one side, Budtz told touchline reporter Mark Ellames about his ‘pride’ in seeing all 39 players don the Doncaster Rovers shirt and do their family proud.

He said: “It has been a great day. In the end, a draw was probably a fair result and I know Tim (Ryan) will be happy with a draw after losing last year.

“I’m proud of the players and they deserved all the cheers and applause at the end of the game. They all played admirably and will hopefully continue their Fit Rovers journey.”

If the former Rovers goalkeeper decides to stop on as Fit Rovers manager, it surely will not be too long before he gets the chance to add to his defence of the Fit Rovers trophy.

Match stats – one goal, one assist for Gelder 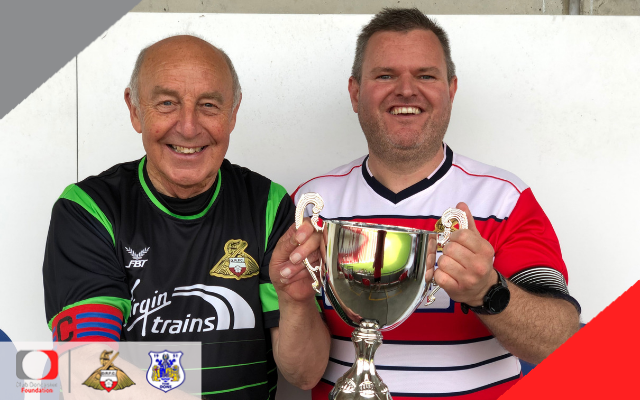