Record number at play on the pitch tournament

Club Doncaster Foundation hosted their annual Play on the Pitch football tournament on Tuesday, allowing children and teenagers from across the borough the chance to grace the Keepmoat turf.An incredible 39 schools turned up for the morning's competition, more than doubling the amount of students who took part in last year's tournament.

The day was filled with a hive of activity around the stadium, with a Superstars competition taking shape in the concourse and of course the main trophy to play for on the pitch.

It was Warmsworth Primary School that came away with the accolade for the second year in a row, and sponsors of the event, Doncaster Business for the Community (DB4C) were on hand to present them with the trophy.

"We are delighted to support the local community by sponsoring Club Doncaster Foundation's play on the pitch event. I was really impressed with standard of football and sportsmanship between teams too."

DB4C have also donated a sum to the winning team, and will present the cheque at the Doncaster Business for the Community Play on the Pitch event on Friday.

In the afternoon, a further 18 teams enjoyed the sunshine at the Keepmoat Stadium, playing out their own tournament, this time for high schools across the borough and kicks teams from across the UK.

“Being able to provide such an amazing opportunity is brilliant, it’s something special to play on the pitch of a EFL team, so to see it all come together was great for everyone involved.

We had every department helping us out to make the day as enjoyable as possible, it was great to see such unity throughout the team."

For more information about the great work Club Doncaster Foundation do, contact our team on 01302 764663 / nick.gillott@clubdoncasterfoundation.co.uk. 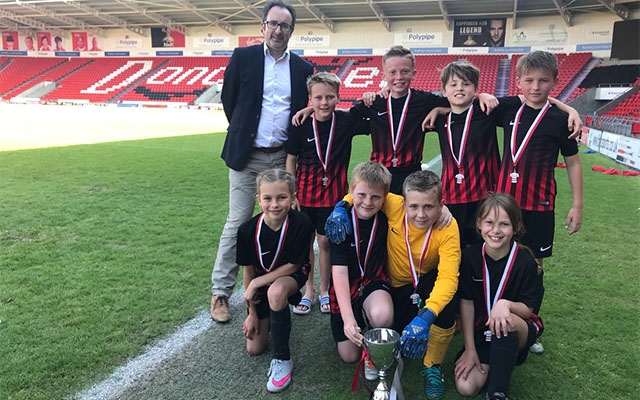