More than 200 boots collected at the boot drive

Supporters and staff from Doncaster Rovers as well as people from across the Club Doncaster Foundation have donated more than 200 pairs of boots to local refugee football team Doncaster Conversation Club United (DCC United).

DCC United is made up of both refugees and asylum seekers with the latter unable to get a job or go to college. For many of these young men, attending a football training session is the highlight of their week.

With asylum seekers unable to earn any money while they wait for papers to be processed, the government provides vouchers worth around £30 per week. This makes participating in sport extremely difficult.

The Foundation have played a huge part in breaking down many barriers which could have prevented DCC United from enjoying football including helping the side acquire kit and providing access to training facilities, and ensuring the team have a place in a five-a-side league. The Foundation have also provided bikes to help with travel.

Club Doncaster decided to hold a Boot Drive to support the team with Fit Rovers leading the way. Not only did the Foundation’s flagship programme provide more than a trolley-load of boots, they also collected boots on Rovers matchdays. Doncaster snooker star Chris Keogan also supported the project collecting more than 50 pairs of boots.

Group head of communications and marketing Shaun Lockwood said: “This season of activities supporting our asylum seeker and refugee community has shown what can be achieved at Club Doncaster.

"From providing facilities for DCC United to train and helping to join a league, organising a match between fans and refugees and providing opportunities to enjoy watching Rovers which builds friendships, Club Doncaster has demonstrated the positive impact sport can have in the community.

“The boot drive has been a huge success with fans and staff pulling together to support members of our society who need it most.

“Imagine fleeing a war-torn country and arriving in a foreign and strange country to legally await your fate. It could be a few months but it could be years and in that time you have to survive on the equivalent on just £30 a week.

"We feel that offering access to football sessions and the occasional match is the very least we can do to make our refugee community feel welcome in Doncaster.

“For us, the 2018/19 season of activities is just the beginning with plenty more planned going forward.”

Rovers season ticket holder and Fit Rovers participant Bob Allan added: “Rallying together, supporting the community and one another is what Fit Rovers and Club Doncaster are all about.

“Without Fit Rovers, I would not be where I am today, so to do my part in aiding the work they do is my pleasure. I played football alongside the refugees at the Keepmoat Stadium during the EFL Day of Action, so I know how much sport means to them.

“I will continue to help, alongside the club and Fit Rovers, until the DCC United players feel at home in Doncaster.”

“Sport and exercise has been such a massive part of my life, so to be able to give people the opportunity to take part is really important.” 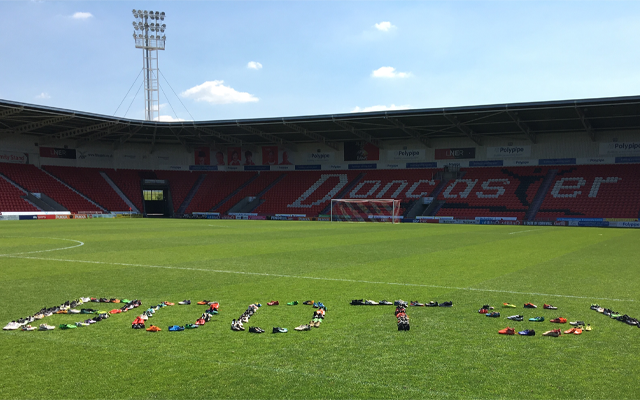