Club Doncaster Foundation were proud to present Matty Blair with his PFA Community Champion award on Saturday to recognise his efforts in the Doncaster Borough this season.

It is the second year in a row that Matty has been presented with the award, and his second award this year, with the midfielder also bagging the 2018 PFA Community Player of the Year for League One.

Matty has been nothing short of a hero this season, and the effort and passion he puts into each session has been particularly amazing this season, after the tragic loss of his brother earlier in the season.

“This club has given me so much in what has been the toughest year of my life, I always say I just try to be the best person I can be and see where it takes me. I’ve been at some great clubs with great community work, but the work behind the scenes hat goes on at Rovers is incredible. There is so much work going on by staff at the club and at the Club Doncaster Foundation that it isn’t much to go down to a session and help out.”

Head of Foundation, John Davis presented Matty with the award. He said:

“We’ve had fantastic support from the club this season and Matty has been the stand out candidate. It makes a real difference in our community sessions when players engage with fans and the work Matty has done has really supported us in achieving our objectives.”

For more information about Fit Rovers, or any of the community work Club Doncaster Foundation do, contact the team on 01302 764663. 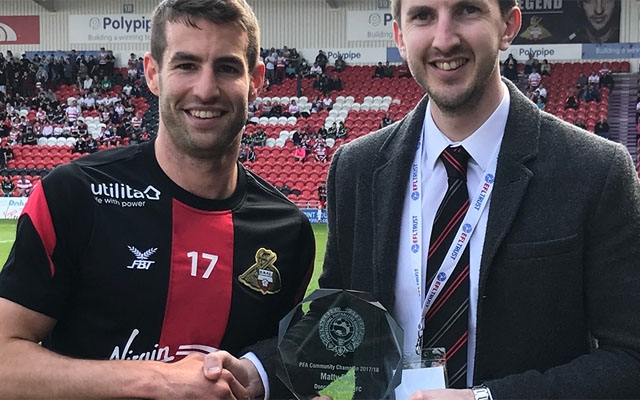