The Foundation’s Premier League Kicks tournament which took place on the Club Doncaster Academy pitches during half-term was a huge success.

Around 80 young people aged between 11 and 14 took part in the event which gave young Kicks participants from across Doncaster an opportunity to mix with people from other areas of the borough while also enjoying a fantastic day of football and fun.

Sport development officer Mark Cooper said: “The kicks programme provides different activities across Doncaster mainly in areas where there’re quite high levels of anti-social behaviour. We give young people in that area something to do on an evening but also look to have a wider impact whether that’s building confidence or getting into employment, or local grassroots teams."

“We use football as a vehicle to engage people but from there give them opportunities that they might normally be able to access if it wasn’t for the Kicks programme.

“We’re using the tournament to get the message across to young people that football is everyone’s game regardless of beliefs, gender, or colour of skin.”

The tournament was given a Show Racism the Red Card theme and aimed to use the power football to raise awareness of racism in the game and wider society. Rovers manager Darren Moore – who is an ambassador for the charity – was impressed by the event and its ability to engage the next generation of football fans.

He said: “These events are really important. They get all the kids from across the local community and use football as a vehicle to spread positive messages. They’ve formed teams and are playing together so they’re achieving something positive but at the same time they’re learning to show respect regardless of nationality or background.

“These young people are the next generation, so if we can spread positive messages to them now then that can only improve communities, the professional football game and right across the game. We’re getting the message across to show racism the red card.”

Kicks participant Fred added: “I found out about the project from school, a school was handing out leaflets about Kicks sessions and I decided to go join it and play with team. I just love playing football.

“I’ve enjoyed this tournament, I’ve met new people and shared how we all play together. I’ve met new friends.

“I was really shocked to see Darren Moore - that was … wow! He’s someone to look up to and it’s great to see how much success he’s had over the years.” 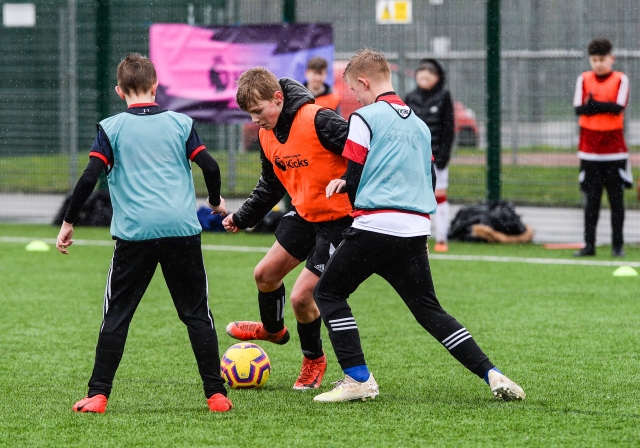