Club Doncaster’s boot drive in aid of the Foundation’s Football Welcomes project went international this week when a cheque from Australia was delivered to the Keepmoat Stadium.

Paul Edward Jeffer is a lifelong Doncaster Rovers fan who emigrated down under a few years ago. Paul still follows the club’s activity online and, after reading news about the Football Welcomes project, decided he wanted to support the boot drive.

Unable to send boots himself, he sent a cheque for the equivalent of $100 AUD to be used to support the project and purchase proper footwear for people seeking asylum.

Jim Duffy – who is known to many people around Club Doncaster due to his fantastic work with the Fans4Foodbanks initiative – brought the monetary donation to the stadium on behalf of Paul and a bag of boots which he donated himself.

Lauren Cuttell Foundation project leader for Football Welcomes said: "Every pair of boots donated means so much to the team. It really helps people seeking asylum in Doncaster feel welcome and feel part of our football family.

"For Paul to feel so strongly about the project that he’s sent money from Australia is an amazing and generous gesture means a lot to me and everyone who is part of the Football Welcomes project."

The Football Welcomes project is run by the Foundation in partnership with Amnesty International and aims to use the power of football to ensure people seeking asylum in Doncaster feel welcome. 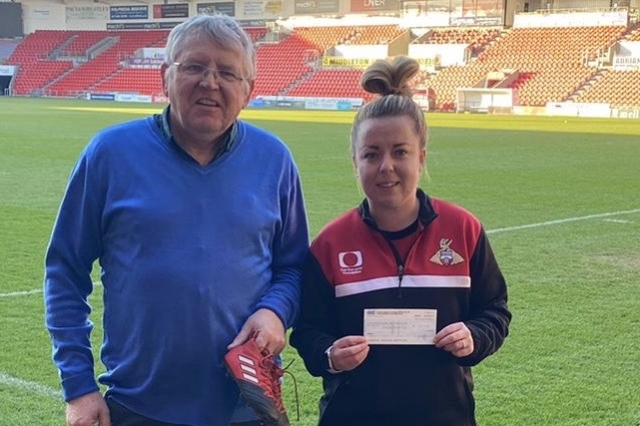