Rovers manager Darren Moore and players rallied together with their Club Doncaster colleagues from the Dons and Belles to help the community response to the devastating flooding which affected the area earlier this month.

Staff at Club Doncaster immediately responded to the flooding by organising collections of food, cleaning material and clothes.
And, once attention turned towards the clean up, players from Rovers, Dons and the Belles lent their support to a day-long fundraising event put on by local band Bang Bang Romeo.
James Coppinger, Ben Sheaf, Joe Wright, Brad Halliday and Madger Gomes joined Rovers manager Darren Moore at the bash, which was held at the Coronation Working Men’s Club in Armthorpe last week.
Dons players Jordie Hedges and Jason Tali also attended, as did the Belles’ Sophie Scargill.
For Coppinger it was a personal cause as he used to live in one of the worst-affected villages.
“I lived in Fishlake for 10 years and in 2007 it was similar when there was flooding before. I’ve still got friends in that area so I know how much it means to all the people have been involved,” he said.
“The club got involved then when we went down to one of the sports halls where people were housed to offer our support.
“As the eldest member of this squad, I’ve been relaying the importance this to the younger ones and they get it, they understand. We’ve come together and donated some money. We want to help because we know what it means to those residents who have been affected.”
As well as handing over a substantial cash donation from the players, Rovers held their pre-match press conference for the League One trip to Wycombe Wanderers at the fundraising event, ensuring Radio Sheffield, Trax FM, Look North and Doncaster Free Press were all there and boosting its profile.
Staff from Club Doncaster also handed over signed Rovers and Dons shirts which were included in the fundraising raffle - helping the day raise more than £8,000.
Stars, the lead singer of event organisers Bang Bang Romeo,
“There’s so much rubbish in the world, this kind of community restores your faith in humanity and is a little bit of a silver lining to such a terrible situation. We’re Doncaster, we come together when we need to,” she said.
“It blew us away when got the call saying these guys were coming down, we half couldn’t believe it. You can’t match that kind of support, so for the guys to be donating, giving up their time and showing their faces means everything to the people here.
“The players have been speaking to the kids in the school choir and getting involved, I saw some with the snake around their neck, and generally putting smiles on peoples faces.” 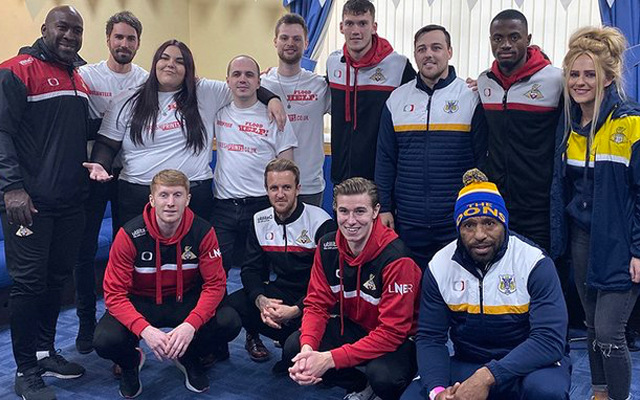