Following a record 2,904 nominations, the CFA have selected 10 local winners of the FA and McDonald's Grassroots Football Awards.

So far, the Fit Rovers project has engaged with almost 200 men in Doncaster and combined, they have lost a staggering 102 stone.

Course facilitator, Nick Gillott commented: "The way the project has evolved over the last 18 months has been astounding and that’s all down to the continued hard work and dedication the team around me have shown.

"We have had a special year this year with our inaugural play on the pitch event in May, so this is just the icing on top and we can't wait to emulate these results.

"I'd just like to thank all the men who have been through the course so far, they are the reason that we have won this award, and the NHS CCG, who have provided instrumental funding to make this project soar.”

It was the participants of the course who nominated the project for the award, showing the fantastic relationship between Fit Rovers and the hundreds of men who have had their lives changed by the course.

The course boasts an 80% retention rate, with an average weight loss per participant of 3.6kg and an average waist circumference loss of 1.9inch.

The Grassroots Football Awards, known previously as The FA and McDonalds Community Awards, recognise and celebrate the work of individuals and groups to instill The FA’s PRIDE values – Progressive, Respectful, Inclusive, Determination and Excellent – and make a positive difference in their club, league or local community.

The full list of winners can be found on: http://www.sheffieldfa.com/news/2018/jul/03/grassroots-football-award-winners

For more information about the Fit Rovers project and how to get involved in the next course starting on the 2ndof August, contact the team on 01302 764663 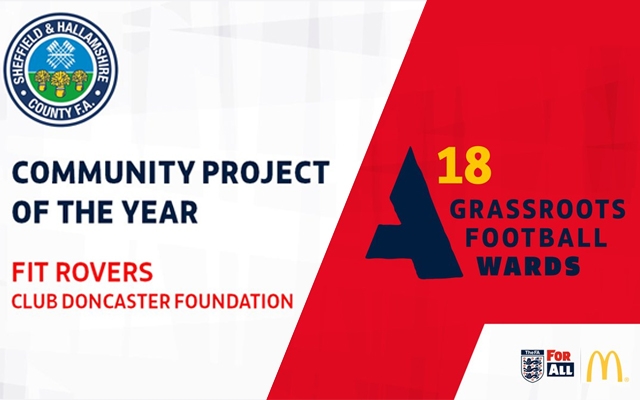