The Love to Ride UK campaign, aimed at encouraging people to get back on their bikes heading into the winter months, was taken up by Fit Rovers in 2018. The project has doubled its efforts in 2019, as more people have been motivated to hop on their bikes for travel and leisure.

A total of 33 participants from the Fit Rovers project, male and female, recorded a ride during September, the most there has ever been take part.

A staggering 414 trips were made by participants, who cycled a combined 5,841 miles – 3,442 more miles than in 2018, showing the determination of all those involved to go one better than the previous year.

Fit Rovers graduate and Club Doncaster Foundation volunteer, Bob Allan, who recognised as the top encourager in South Yorkshire in 2018, has once again made it into the top ten for encouraging people to cycle during September.

He has been joined in the top ten by Steve Vickers, who, together with fellow Fit Rover Stephen Evans, run the weekly cycling sessions at the Foundation.

Health and wellbeing officer Scott Copeland said: “Cycle September is a fantastic way to recognise the efforts of our participants during this challenge.

“Two of our participants, Steve and Bob, were ranked in the top ten for the number of journeys made by bike in that month, which is a credit to their commitment to the project.

“The campaign was such a success among the group and many participants are eagerly awaiting the launch of Love to Ride’s Winter Wheelers event. We hope that campaigns such as this can encourage individuals to try cycling as part of adopting a healthier lifestyle and active travel methods.”

The main focus of Cycle September has been to encourage and support others who have shown an interest in cycling. The volunteers have led group rides on Wednesday and Thursday evenings using bikes from the CDF bike library and these have been a huge hit with the new riders.

Love to Ride UK has partnered with more than 1000 organisations during Cycle September, which saw 18,823 participants get involved in cycling, logging more than 250,000 trips.

For anyone wanting to get into cycling or learn more about other opportunities the Foundation are able to offer through partnership with Doncaster Council, please contact Scott Copeland on 01302 764663.

For more information on how you can get involved, please visit https://clubdoncasterfoundation.co.uk/health-and-wellbeing/cycling 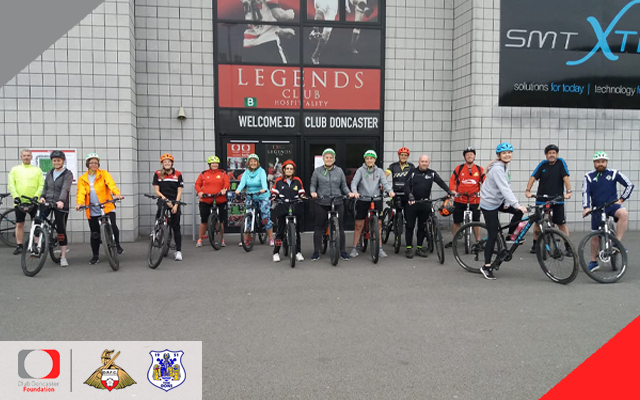