Pulling up your socks, tying your boots and walking out of the Keepmoat tunnel is the make up of every Doncaster Rovers fan's wildest dream.

For 40 men, that dream became a reality on Sunday, as they graced their boyhood club's turf to live life as a professional footballer for the afternoon.

The dream was provided by Club Doncaster Foundation's Fit Rovers project, a free 8 week health course based at the Keepmoat Stadium - a course that is changing the lives of men across Doncaster.

The graduates from the course, who have combined lost an incredible 78 stone, were rewarded for their continuous hard work with the chance to play against each other on the pitch.

Each team were kitted in the home and away Doncaster Rovers strip respectively, and arrived at the ground as the first team would, prepared in the changing rooms and took to the pitch to live out a fantasy.

The dream didn't end there. Each team had Doncaster Rovers legends in charge - Jan Budtz and Hall of Famer, Tim Ryan each took the reins on a team and barked out their commands from the dug outs.

If that wasn't enough magic for one day, current Rovers skipper, Andy Butler rocked up with boots in hand and insisted that he got a run out too.

He played 10 minutes for each side, after giving the lads his tips for handling the 319 people who were roaring in the crowd.

Butler said: "I can't believe how fantastic this is, I'm delighted to be a part of it. I've been an advocate of Fit Rovers since it began in January 2017, I went to the first ever course and to see it progress as it has, I feel proud!

"The course is changing people's lives and hopefully this event on the stadium [on Sunday] can engage a lot more people too."

It was Jan's team who stole the spoils on the day, running out 5-4 winners after an intense closing 15 minutes. Awards were won on the night and goals were scored, but every participant who stepped out on that field is a winner.

For more information about joining one of the continuous courses throughout the year, or to find out what the courses include, contact the Fit Rovers team on 01302 764663 / fitrovers@clubdoncasterfoundation.co.uk 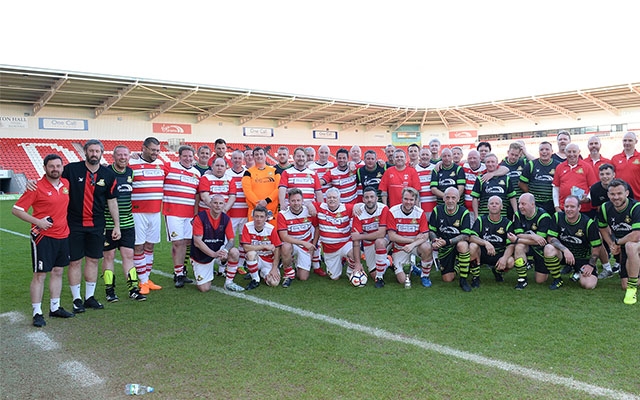