Dr Crichton raises £477 for Cancer Research at the Keepmoat Stadium

Dr Crichton has signed up to take part in this year’s Deloitte Ride Across Britain and since then has clocked up more than 2,200 miles on two wheels as he gears up to peak fitness.

Over nine consecutive days, David will cycle 980 miles from Land’s End to John O’ Groats – an average of 110 a day – to raise funds for national good cause, Cancer Research UK.

At the Portsmouth fixture, David promoted his challenge pitchside by bidding to complete a 50km cycle on a stationary exercise bike based between the south and west stands.

David starts the main challenge on Saturday September 8, 2018. Those energy-sapping training sessions – some up to 100 miles in a day – have resulted in David burning off a staggering 763,000 calories in the saddle as he pushes himself to his limit on his carbon road bike.

He will have to overcome some of the most challenging hill climbs in England, Wales and Scotland as he – and more than 600 members of the amateur cycling world – make their way to the finish line on Sunday September 16.

David, who is a GP at Bentley Surgery and chair of NHS Doncaster Clinical Commissioning Group,  says: “Cancer has touched my life, having claimed three of my four grandparents and recently affected three of my work colleagues. It will continue to affect many more people until we find a cure for this dreadful disease.

“Cancer Research UK is leading the charge to find a cure and, as a doctor with a special interest in cancer care, I know how valuable their work is. That’s why I am supporting them through the Deloitte Ride Across Britain.

“Visit my Just Giving page to donate. Even a small contribution will help bring the cure we’re all looking for a little closer. Thank you.”

Volunteers had a bucket collection for Cancer Research UK on Saturday’s game, which combined raised the £477 for Cancer Research, but fans can also text in by sending DCCG99 £xx to 70070. Replace the xx with whatever amount you wish to donate. You can also donate via David’s JustGiving page by clicking here. 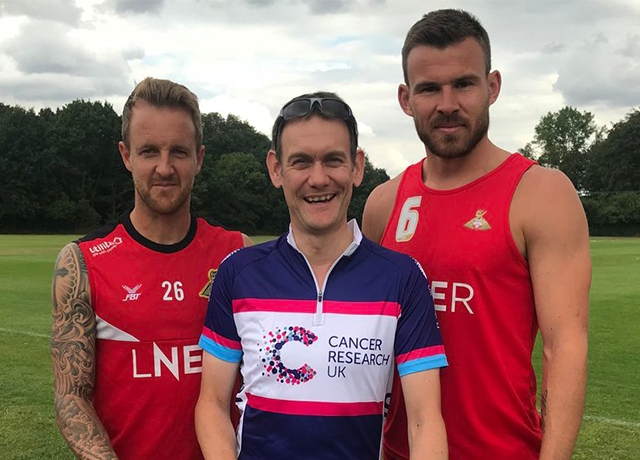