Club Doncaster Sports College women’s captain Chaneice Howson has expressed her delight at the team competing in the EFL Community and Education Alliance (CEFA) league for the first time.

Chaneice is studying the first year of her BA Hons Physical Education and Sports Coaching degree at the college, having started on a level three BTEC sport course in 2017.

A player from day one, Chaneice has seen the Women’s Academy at Club Doncaster Sports College go from strength to strength, gradually growing in numbers to a point where a squad was submitted for the CEFA league this season.

The CEFA League is a football competition professionally governed by the EFL and is eligible to both young men and women who are enrolled on a post-16 education course with their Club Community Organisations.

Through the competition, students are able to achieve their education goals, whilst playing competitive football for their local club against teams representing Premier League and EFL Clubs across the country.

Chaneice said: “When I first started at the college, I was a very shy character and I didn’t have much confidence. Being able to play for the academy enabled me to come out of my shell and be more confident on and off the pitch.

“This year I was extremely grateful to be chosen as captain, and I’ve enjoyed every minute of it. I really enjoyed seeing the team progressing collectively, and I also enjoyed watching people achieve individual success.”

The central defender believes that the team has put in a performance to be proud of during their first EFL season, with the team currently occupying fifth place.

“We have experienced players, as well as girls that either play a different sport or they didn’t play football at all; so it hasn’t been easy for some of the girls, but they have been exceptional.

Chaneice gave a special thanks to Academy Coach Eric Randerson, who she believes has ‘brought out the best’ in the group of players.

Eric commented: “Chaneice has always been at the forefront of supporting and developing women’s’ football at Club Doncaster Sports College. We now have a full squad of girls who attend regular training sessions and match days.

He added: “Chaneice has proudly led the team by example and the squad have developed their game and show a great attitude on and off the pitch.

“It’s an exciting time for all involved and we’re looking forward to seeing the side progress in the future.” 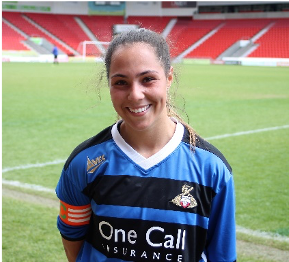