Formed in 2018, the CEFA league is a football competition organised by the EFL which allows college students who are enrolled on a sporting course affiliated with their Club Community Organisation to participate. The league runs alongside the education programme and students represent the club that is associated with the college.

Rovers have three teams that compete in three of the twelve leagues ran by the EFL with fixtures being played every Wednesday afternoon. The teams represent Rovers on the pitch and they study a Level Three BTEC in sport at Club Doncaster Sports College during the rest of the week. Rovers excelled on the pitch throughout the 2018/19 season with one of their teams claiming the league title.

“The CEFA competition supports the great initiatives that the clubs run, in our case here at Doncaster it’s an education programme and further education courses for 16-18 year-olds,” Turnpenny said.

“It’s been excellent in supporting the educational courses we run, in offering students unique opportunities to experience alongside their studies. Obviously qualifications are the most important part of the education courses, but there’s nothing wrong with applying what you learn in the classroom out in a practical environment on a football pitch.”

Club Doncaster Sports College student Wade Robson was a part of the team that won the league last season and he says he appreciates the unique chances that studying a BTEC with the Sports College gives him.

“Studying at Club Doncaster means having an opportunity to play football. It’s a bit of a reward system - if you do well in the classroom, you get the chance to play in this league and represent Doncaster Rovers,” he said.

“My view is that it’s a real privilege. In the CEFA league we get to play on the best pitches, wear the club badge, it gives you a bit more experience and shows you what it’s like to be a professional.

“The CEFA league is a real motivation in the classroom, because you know that if you let the college tutors down it will get back to your coach and you’ll be taken off the team - not because you’re not good enough, but because to play you have to be performing in the classroom.”

Club Doncaster Sports College are holding open events on January 23, February 27, and March 26 at the Keepmoat Stadium so you can come along and see if studying with us is the best option for you. 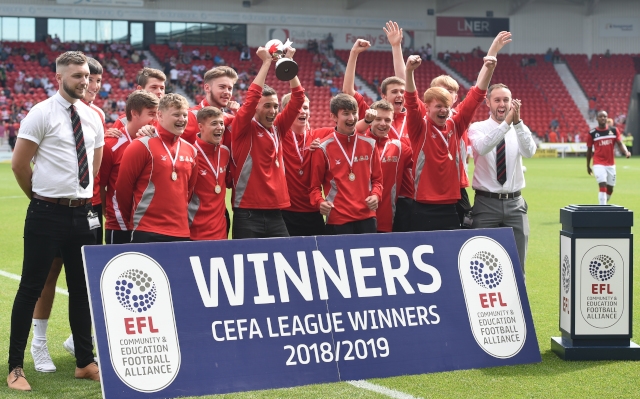