Over the past few weeks, everyone associated with Club Doncaster has pulled together their sources in order to raise more than 200 boots for local refugee side Doncaster Conversation Club United (DCC United).

The team’s manager Denise has been funding the purchase of boots using her pension money and with football sessions (supported and funded by the Club Doncaster Foundation) growing in popularity, this was beginning to cost a lot of money.

Speaking at the handover, Denise said: “I just can’t say a big enough thank you, honestly and truly. It’s just such a wonderful, generous and connecting thing. Awareness is so important as it helps people see beyond the label of asylum seeker to these guys and girls who just want to come and play football like people do – that means so much.

“It makes a huge difference because it says we respect you and we want you to have access to football. That might sound like a huge statement when we’re talking about donating a pair of football boots but really and truly it isn’t.  This kind of thing helps people feel welcome – I’m absolutely overjoyed as you can probably tell.

“When they come here, the footballers have said to me ‘I feel free’ and for me, that’s just the biggest statement that anyone in their position can make.”

DCC United player, Elisha, said: “This training helps us a lot in removing us from loneliness. The partnership with Doncaster Rovers and the Foundation helps us get the pitch where we are doing our training each Friday. For us as asylum seekers, it’s good and it helps us a lot.

“We have no jobs, we are not working and when you stay home you feel like stressed so anything that can come along and remove some depression is great. Playing sport is good especially today when the weather is so good, it’s helped a lot to be involved in sport. 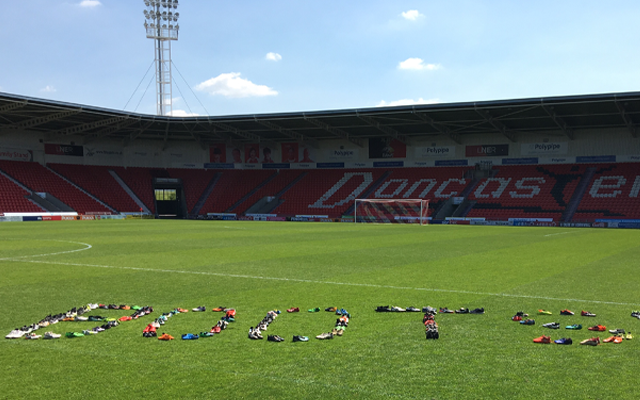