Club Doncaster Foundation’s bike library has continued to help people across the Doncaster region, none more so than cycling-enthusiast Matthew.

The free hire scheme, funded by Doncaster Council, allows people to hire bikes and equipment free of charge. Doncaster-born Matthew has benefitted massively from the scheme, having faced difficult times as of late.

He said: “I lost my job near the end of 2018 and have been struggling to find work, the bike scheme has given me the motivation to get myself back out in town.

“I’ve struggled with heart problems which means I can’t drive a car, so cycling is the best way for me to get around.”

After months of deliberation around purchasing a bike, Matthew was told about the bike hire scheme from the Job Centre, which he took advantage of straightaway.

He said: “I needed a way to get around. I’m not a huge fan of buses and thought about getting a bike, but with the loss of my job I didn’t have much money spare.

“The Job Centre told me about the Foundation’s free bike scheme so I rang up on the Friday, and by the Monday I was picking it up. It was that easy.

“I recently moved to Selby and wanted to carry on with the bike hire, so I changed bike, which Scott helped me do with ease.”

Having recently secured himself a job, Matthew spoke about the tough times after losing his job, and how the bike kept his mental health in check.

He said: “It was a week before Christmas when I lost my job. I then lost my flat soon after and I was so down. I struggle with my mental health, so without having the bike I’m not sure where I’d be right now.

“Cycling relaxes me and allows me to think. It’s a great scheme and now I will be using the bike to cycle to and from my new job.”

Club Doncaster Foundation is now recognised as an official Yorkshire Bank Bike Library known as Rovers Bike Library. A range of more than 75 bikes are available to the public for hire including children's bikes, road bikes, mountain bikes and all the necessary equipment depending on which adventure you choose.

The public can also donate unwanted bikes to Club Doncaster Foundation, which will then be fixed and modified by the specialised mechanics (dedicated volunteers) and used as part of our hire scheme to allow more people to access cycling. 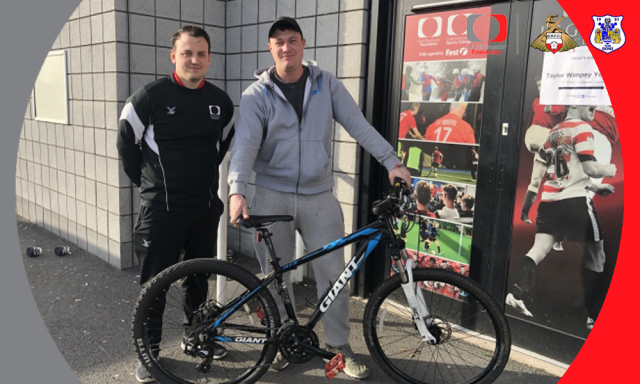