A leading international infrastructure group in the UK, Balfour Beatty, in a quest to have an impact in communities they work in, have been donating money and resources to charities and originations nationwide, with the Foundation being a most recent benefiter.

Currently working on the DN7 Unity project, which compromises of a new link road from the M18 to Waggons Way in Stainforth, the public limited company handed over a Challenge Conquer mountain bike, suitable for use in a variety of cycling provisions ran by the Foundation.

A Balfour Beatty spokesperson said: "Balfour Beatty are extremely proud to play a small part in the Club Doncaster Foundation journey by donating a bike which will allow more people to access cycling.

“Doncaster Rovers is a fantastic organisation, with a dedicated team who keep the Doncaster community mobile and we wish the cause every success in the near future."

The bike did not stay in the Keepmoat Stadium for long, with an employee from telecommunications service provider, BT, hiring the bike as part of a cycle to work scheme.

This scheme gives those without means of transportation the ability to get around Doncaster, with the bikes having regular maintenance checks throughout a hire.

Health and wellbeing officer, Scott Copeland, said: “Over the last 3 years we have seen the reputation of our cycle hub grow and with that, demand for bike hire rapidly increase.

“The bike Balfour Beatty provided us with was given a quick check over and was soon been put to good use in the community.”

Through a partnership with Doncaster Council, the Foundation is able to offer a free-of-charge cycle hire scheme, ideal for families exploring the scenic landscape and cycling greenways that link the local area.

Anyone can book onto the guided cycle rides, which are especially popular during the school holidays as a fun, free day out.

The Foundation is now recognised as an official Yorkshire Bank Bike Library to be known as Rovers Bike Library - a concept for the public to hire bikes and equipment free of charge. A range of more than 75 bikes are available to the public for hire including children's bikes, road bikes, mountain bikes and all the necessary equipment depending on what purpose the bike will be used for.

The public can also donate unwanted bikes to Club Doncaster Foundation, which will then be fixed and modified by the specialised mechanics and used as part of our hire scheme to allow more people to access cycling.

For more information on the Foundation’s bike library, contact the cycling team on 01302 764663. 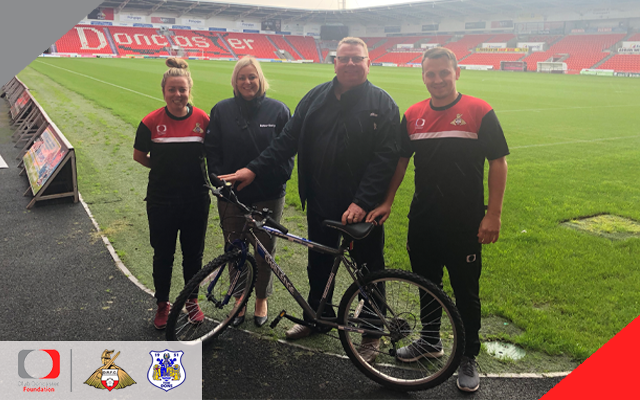