Participants from both Doncaster’s and Leicester’s Football Welcomes projects battled it out in an entertaining football match at Club Doncaster Academy on Wednesday night.

Club Doncaster Foundation and Leicester City in the Community teamed up with Amnesty International UK’s Football Welcomes community project to put on a football match for refugees and people seeking asylum.

A total of 25 Football Welcomes participants took part, donning the shirts of Doncaster Rovers and Leicester City, before sitting together in the Keepmoat Stadium to watch Rovers take on the Foxes’ under-21’s in the Leasing.com trophy.

The Leicestershire outfit won both games, with the refugee team triumphing 3-1 against Doncaster’s DCC United, whilst Leicester’s under-21’s grabbed a convincing 3-0 win over Rovers.

This was the first time that DCC United, Doncaster’s refugee football team, had played a competitive football match, and found themselves level at half time. The fairy tale result was not to be, as Leicester seized control of the game to run out comfortable winners.

"All the players worked tremendously hard and proved why this project works.

"We had 25 participants playing a game of football, representing their clubs and being proud whilst doing it.

"Hopefully Leicester will be up for a rematch in the New Year; a lot of our participants are looking forward to playing again."

Football Welcomes is a nationwide programme, supported by the People’s Postcode Lottery, designed to work with local organisations, including refugee groups, local charities, amateur football teams, fans’ groups and schools to bring people together in their communities.

Alongside a focus on improving physical activity in the region, the three-year scheme will also include the opportunity for participants to take English classes, undertake referee or coaching training and to join local grassroots football clubs.

“The entire match has been brilliant to watch.

“I was chatting to the players before they went on the pitch and they were all really excited about taking part. Life is pretty stressful for them and this opportunity allows each player to meet new people who are in similar situations.

"Great work from both clubs."

Club Doncaster will continue to support DCC United, providing them with facilities and training kit as part of the ongoing partnership. 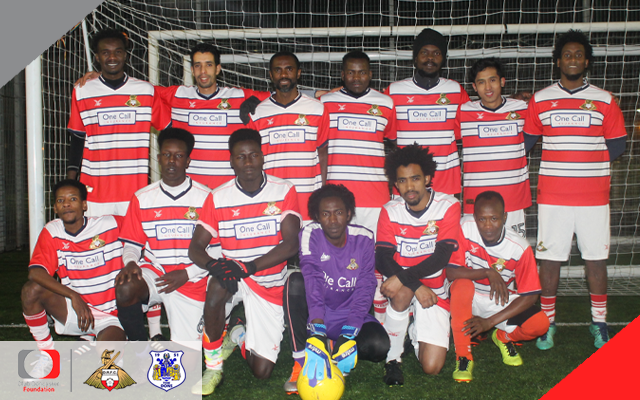